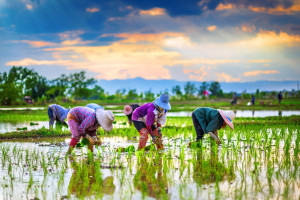 Melioidosis is caused by the soil-dwelling bacterium Burkholderia pseudomallei. The clinical manifestations of melioidosis include mild infection of the skin, disseminated disease with organ abscesses and severe sepsis. The highest numbers of cases occur in endemic regions of Thailand and Australia. Rising incidence rates have been recorded in Thailand between 1997-2006 during which the average mortality rate was 42.6%. In 2006, melioidosis and tuberculosis mortality rates in northeast Thailand were equivalent and second only to HIV/AIDS for infectious disease deaths. In regions of northern Australia, where intensive care treatment is more readily available, the mortality rate is still alarmingly high at 20%.

Melioidosis is highly endemic to northeast Thailand and northern Australia, but more recent evidence indicates a much wider distribution that includes the India, southern China, Hong Kong, and Taiwan. There are also an increasing number of reports of possible endemic disease in the Caribbean, Central and South America and East and West Africa. The predicted global distribution of melioidosis is 430,000 cases/year resulting in nearly 250,000 deaths.

DxDiscovery has completed an SBIR Phase I & Phase II from the Department of Defense – Chemical and Biological Defense Program to develop high affinity therapeutic antibodies for treatment of melioidosis. This award provided an R&D budget of $200,000 over a 9 month Phase I period and $1,000,000 over a 24 month Phase II period. Currently the project is extended for two more years as sequential Phase II that provides additional revenue of $1,000,000.