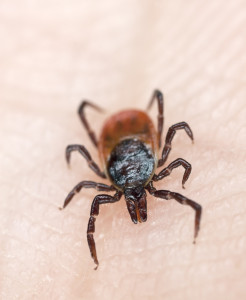 Lyme disease is a devastating infection caused by the bacterium Borrelia burgdorferi (Bb). Ticks are a natural reservoir for Bb; the bacteria survive in salivary glands and are transmitted to humans during a bite event. Since Bb was isolated in the 1980s there has been an increasing awareness of the prevalence and spread of Lyme disease throughout the United States.

For Lyme disease, early diagnosis is a critical determinant of patient outcomes. Early diagnosis allows for informed clinical decisions and the administration of antibiotics in the first stages of disease, when they are most likely to prove effective. Currently, there are no tests that identify early-stage disease, and direct culture is ineffective. For established infection, the CDC recommends the use of techniques that rely on the detection of Bb-specific antibodies in patient serum. Unfortunately, Bb-specific antibody develops weeks after infection; too late for timely administration of antibiotics.

In endemic areas, surveillance of tick populations for the presence of B. burgdorferi may provide actionable information and guide the decision making process. At present, there are limited methods to survey tick populations for B. burgdorferi, none of which are suitable for completion in the field. If it were available, a field-deployable assay could greatly enhance the ability of military, government, and private agencies to track B. burgdorferi hotspots throughout the United States and abroad. An increased awareness of these areas would be a considerable benefit to public health and service personnel that are stationed in endemic areas.

New and improved methods to diagnose Lyme disease must be developed for patient outcomes to be more favorable. Detection of a Bb antigen (biomarker) early during infection would directly address the limitations of current Lyme disease diagnostics. Bb specific biomarkers of infection are present before the production of antibody, and may give positive results earlier in the course of disease. The identification of biomarkers that are suitable for incorporation into clinical diagnostics is not trivial. DxDiscovery will address these challenges using in-house technology that has been proven to identify biomarkers in pathogenic bacteria and fungi.

DxDiscovery is also involved in developing a fileld- deployable assay for detecting B. burgdorferi from ticks

Lyme disease is the most common vector borne illness in the United States. An estimated 30,000 new cases are reported each year; however, the CDC estimates that this figure may be dramatically underrepresented, with the true number of cases likely approaching 300,000. A diagnostic test that detects early-stage Lyme disease would have priority access to this market, and may become a leader in market share within a short period of time.

DxDiscovery was awarded a Phase I STTR proposal to the NIH to pursue biomarker discovery for Lyme disease. This proposal provides an R&D budget of nearly $600,000 over two years. A Phase I SBIR project that provided revenue of $150,000 to develop a field-deployable assay for tick surveillance over a 6-month period was successfully completed.